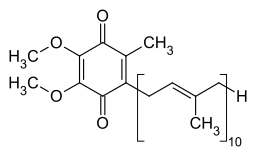 Coenzyme Q10 is a physiological molecule of great relevance in several cellular processes, acting both as an electron transporter in mytochondrial oxidative phosphorilation (responsible for most of ATP production) and as a liposoluble antioxidant agent, in cellular membranes.

Heart is an organ with a primarily high energy demand and (by consequence) with a particularly high susceptibility to oxidative stress and damage by ROS.
CoQ10 deficiency may be a severe condition, correlated to heart issues (but also to systemic troubles); thus CoQ10 supplementation is useful to support cardiovascular health.

Kaneka developed in 1977 industrial production of CoQ10, through fermentation of yeast cells, and is today the main top-quality Ubiquinone producer, in Japan.
Kaneka also deposited DMF in Italy and other countries for pharma applications.